Tickets for the 2019 season are on sale at SupercrossLIVE.com. As the most competitive and highest-profile motorcycle racing championship in the world, Monster Energy Supercross has entertained millions of fans for 44 years. Last year’s 450SX Class Champion, Jason Anderson, looks to make his return with Rockstar Energy Husqvarna Factory Racing in front of nearly one million fans in live attendance over the course of the 17-race series.
Also making a return in 2019 is the Triple Crown, which was introduced in 2018, in three cities: Anaheim, Detroit, and Houston. Additionally, the East/West Showdowns will take place in Atlanta and Las Vegas.
“We’re really looking forward to defending the Triple Crown Championship in 2019,” said Eli Tomac, last year’s Triple Crown Champion and recent Monster Energy Cup $1 Million winner. “The team was excited to take home the inaugural championship last year, and the three Main Event format is the same as the Monster Energy Cup, which we just recently won. Of course, the goal is always to win the overall Supercross Championship, but these races should be fun for the fans because they are short, fast and intense.”
The Triple Crown, at Angel Stadium in Anaheim on Jan. 19, Detroit’s Ford Field on Feb. 23 and Houston’s NRG Stadium on March 30, allows fans to see their favorite athletes race even more than on a typical night of Monster Energy Supercross. Instead of just one Main Event, the three Main Event format, originally introduced eight years ago at the Monster Energy Cup, has continued to thrill fans as athletes are featured three times throughout the night. Qualifying races will reduce the field to the top 22 racers in each class where an Olympic-style scoring system will be used to determine an overall winner, and championship points are awarded based on the overall finish.
Two 250SX Class East/West Showdowns will continue to double the excitement at Mercedes-Benz Stadium in Atlanta on March 2 and Sam Boyd Stadium in Las Vegas on May 4 as fans will have the opportunity to see 22 of the fastest riders from both regions of the 250SX Class Championship (who usually don’t compete together) battling each other for victory. The Main Event will be the first and only time throughout the night that all of the 250SX Class stars will line up on the gate for a 15-minute plus 1 lap Main Event where winner takes all.
“I think the East/West Showdowns are really cool and a fun change in the schedule, especially for the fans,” said Christian Craig of GEICO Honda. “The best part is probably finding out which coast is more dominant or if they are pretty even.”
The 2019 season is shaping up to be one of the most anticipated in recent history with four rookies jumping up to the premier class with Monster Energy Kawasaki’s Joey Savatgy, Autotrader/Yoshimura Suzuki Factory Racing’s Justin Hill and both defending regional 250SX Class Champions, Rockstar Energy Husqvarna Factory Racing’s Zach Osborne and Monster Energy/Yamaha Factory Racing’s Aaron Plessinger, all making their 450SX Class debuts at Angel Stadium on Jan. 5. Adding to the competition will be Team Red Bull KTM Factory Racing’s Marvin Musquin and newly-signed teammate, Cooper Webb, Monster Energy/Yamaha Factory Racing’s Justin Barcia and a slew of additional talent, including Smartop Bullfrog Spas Honda’s newest member, Malcolm Stewart under the tent with top veteran Justin Brayton. 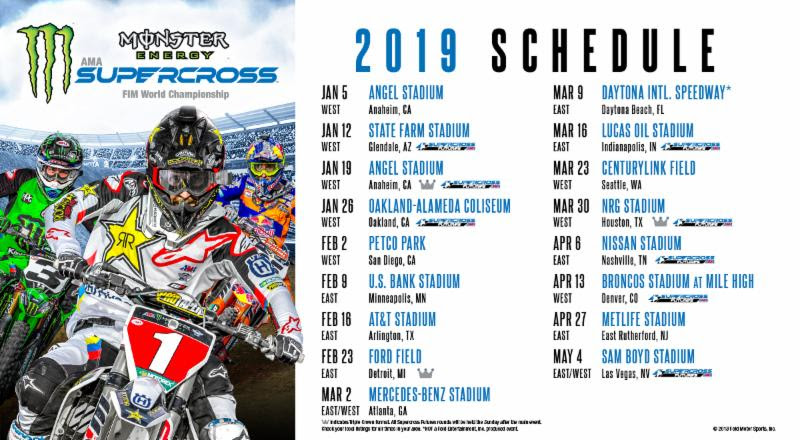 Additionally, the tracks in 2019 will showcase expanded features and unique city-centric obstacles, including a large “speedway style” flat turn, split lanes, elevated turns and back-to-back whoop sections in select markets. Sand will be its own obstacle in seven markets, and over/under bridges will be used in four markets.
The FanFest experience will provide fans an even more festival-like atmosphere in 2019 spanning 14 acres that opens at noon on race day. FanFest has something for everyone with experiential activations, autograph sessions, a Supercross Virtual Reality experience and more, while allowing fans in-and-out access to the track to watch practice and qualifying if they so choose.
Lastly, in eight select markets, Supercross Futures, an AMA Amateur National Championship, will establish itself as the world’s premier developmental platform for amateur supercross racing culminating on October 20-21, 2019 in an AMA National Championship in Las Vegas.
For more information, visit SupercrossLIVE.com, the official website of Monster Energy Supercross, or follow via social channels:
About Feld Entertainment, Inc.:
Feld Entertainment® is the worldwide leader in producing and presenting live touring family entertainment experiences that bring people together and uplift the human spirit. Properties include Monster Jam®, Monster Energy Supercross, Disney On Ice, Disney Live!, Marvel Universe LIVE!, Sesame Street Live!,DreamWorks Trolls The Experience and Jurassic World Live (coming Fall 2019). Across the brand portfolio, Feld Entertainment has entertained millions of families in more than 75 countries and on six continents. Visit feldentertainment.comfor more information.
About the American Motorcyclist Association:
Founded in 1924, the AMA is a not-for-profit member-based association whose mission is to promote the motorcycle lifestyle and protect the future of motorcycling. As the world’s largest motorcycling rights and event sanctioning organization, the AMA advocates for riders’ interests at all levels of government and sanctions thousands of competition and recreational events every year. The AMA also provides money-saving discounts on products and services for its members. Through the AMA Motorcycle Hall of Fame in Pickerington, Ohio, the AMA honors the heroes and heritage of motorcycling. For more information, visit americanmotorcyclist.com.